Never mind the 4th wall, how about knocking down the back wall? Break out upstage centre from the Lyceum and you’ll be into Saltire Court on Castle Terrace. You know you’re in one of Edinburgh’s superior premises when the tenants include global accountants Deloittes and KPMG. A neat, if accidental, location then for a play whose principal character has had enough of audit, who hammers her stapler into her desk, has hysterics and takes a holiday but with absolutely no intention of coming back to the office.

Bye-bye patronizing suits, hello lemon yellow, orange, purple and blue V stripes. It’s 1970 (kind of), when you could buy novelty knives at the airside shops before boarding at Gate 14. Stressed out Lise is all decked out for the fervid south – could be Naples, might be Palermo – and with one type of man very definitely in mind.

This is prime Muriel Spark territory. She had been living in Italy since 1967 and the shocker that is The Driver’s Seat was published three years later. Here we have it adapted – call it exposed – and directed by Laurie Sansom in a one act, ninety minute, cross-over between garish psychodrama and police procedural. It is articulated, televisual theatre; think anglepoise lamp on accountant’s desk and mess with the springs. 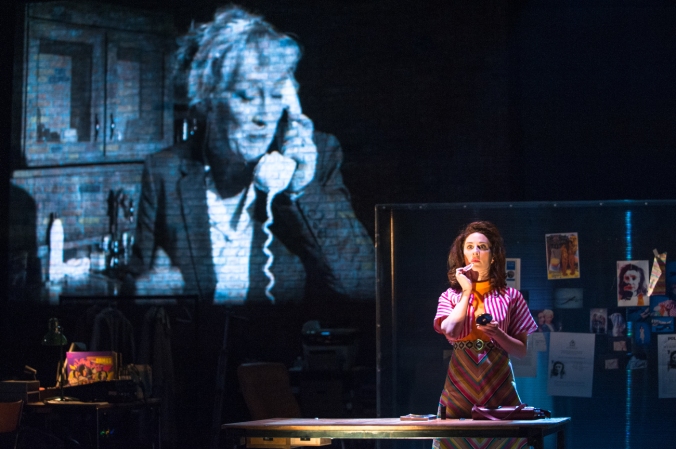 Centre stage is the incident ‘room’. As the investigation into ‘What-Happened-to-Lise?’ is conducted, so information, photographs, etc. go up onto a transparent wipe board. You see ‘VICTIM’ in marker pen. That’s retrospective action for you, sorted, marginally distracting, smart; very unlike the downstage action, where ‘What-Is-Happening-to-Lise’ is compulsive, jumpy, and unstable.

Lise herself (in an impressively tight performance by Morven Christie) is vulnerable because she is alone and out there, fixated, conflicted. At home in her bedsit, trying to sleep, she suffers – hands over ears – the moans of her neighbours having sex. Thirty-four years old in the book, she masquerades as the lady abroad: at one point a ‘widow and an intellectual from Iowa, New Jersey’ (sic) – supposedly fluent in four languages but plainly lost when it comes to real Italian. And it is real, via potent supporting roles from Ivan Castiglione and Andrea Vopetti.

There are no hands to the big clock in the incident room, which does point to alienation theory, but up come the sound cues and they appear, chronicling Lise’s known movements from hotel lobby to department store . There’s live mapping of her taxi on the large upstage screens while handheld TV cams relay fraught close-ups. You would think that little is hidden on such a tech-savvy set but as to why Lise acts the way she does there’s not much to go on, which is probably the existential point. Are we watching an object/abject study in self-destruction or an introverted and skittering operetta, complete with CS gas? Composer and sound designer Philip Pinsky uses mild jazz in ironic counterpoint to the spiky and alarming story. Did he, I wonder, smile at the desperate lyrics of the Sniff ‘n’ The Tears’ hit single Driver’s Seat (1979), where  “She had another way of looking at life”?  Accept stunned recall of Elizabeth Taylor & Ian Bannen in film-of-the-book Identikit of 1974 and you can see that Spark’s work is heading straight for Thelma and Louise some twenty years down the road, except that Lise has no buddy to go over the edge with.

Take that original, startling writing of 1970 – you’ll want to read it – and lay bare its mucky gender issues. The result, from creatives and excellent cast, is hard sprung. You won’t enjoy its forlorn subject, unrelieved by some crazy Italian driving in outsize shades, but it is acute work.

A National Theatre of Scotland production.

Go to The Driver’s Seat and the National Theatre of Scotland here.

Visit the The Lyceum archive.