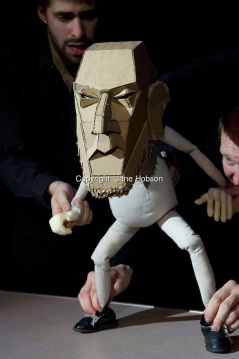 “One of the most wonderful performances I have ever witnessed”

One table, one puppet, three men, no strings. And one of the most wonderful performances I have ever witnessed.

While it might seem quite basic, this spectacular puppet show (which could also be classified as stand-up comedy – more on that later) is a tour-de-force in keeping theatre simple yet incredibly effective. Within seconds, the carefully constructed cardboard face and cloth body became an intriguing old man whose every word and movement held me completely captive. And for a show an hour long, that’s no mean feat for something with no pulse.

The puppet began by introducing us to his table – his home – pointing out the garden, his vegetable patch, and where it might be extended to grow more carrots. All the while, he kept us entertained with witticisms most comedians would be proud of, and a dash of audience interaction to keep us all on our toes. And it’s all delivered so naturally, I was completely transported into the world of the table.

Yet while the slow and sometimes inappropriate ponderings of a confused old man were a delight in themselves, the crux of the performance lay in its original purpose – to retell the story of Moses’ saving of the Israelites and his eventual death on the mountainside. In this guise we see him humble, we see him angry and we see him defeated. We see him battle against the elements and lie down to sleep (which is far more difficult for a puppet than it may be assumed). And when he finally leaves the table, I genuinely felt lost and upset to say goodbye. Perhaps this says something about my childish tendencies, but the sell-out crowd of all ages seemed just as moved as I was.

The hands and voice behind this masterpiece – Nick Barnes, Mark Down and Sean Garratt – lovingly move every centimetre of the puppet with precision in care, and always in sync, down to their own breathing. What was particularly enjoyable about their roles were the playful and apparently improvised moments of the show, where the performers joked with and challenged each other to keep up with the pace. At one stage the poor puppet’s hand fell off, probably by accident, but this was covered and managed very well, even if the performers found themselves creasing up with infectious laughter.

About two minutes in I was hooked and thought this show has the potential to launch itself into my top ten favourite things I’ve ever seen on stage, and by the end it had firmly secured its place. Simply masterful.

Go to The Table at Manipulate and Blind Summit