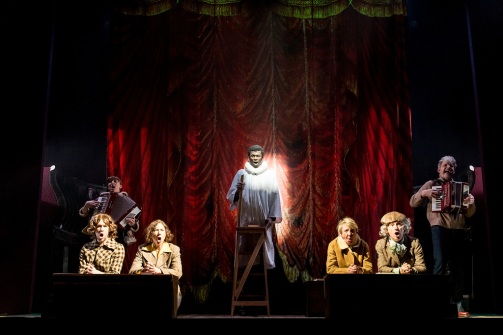 ‘Our God above is a God of Love’ with Dominic Marsh, Hannah McPake (back), Amanda Hadingue, Charlie Folorunsho (back), Myra McFadyen, John Cobb, Iain Johnstone (back).

I suppose that it is justifiable that Edinburgh’s Gallow Lee was half a mile down Leith Walk and not on East(er) Road. You don’t want too much of the promise of the resurrection to hang about the gibbet. And what do atheists care anyway? Let the foul mouthed blasphemer swing. Or maybe not. It depends on the law, on the Kirk, on freedom of expression, on private conscience, on your reception of I Am Thomas.

Here’s an examination in popular, not judicial, terms of ‘Extreme Justice’ in its unholy alliance with the Scottish Presbytery of 1696. Did Thomas Aikenhead, a gobby twenty year old student at Edinburgh Uni., deserve to be put to death for railing and cursing against his God? Well, no, not in the opinion of this fiercely well executed (Ha!) piece of musical theatre.

There was just the one Thomas A. but there are several red T shirts with his name on it; one in French with ‘Je suis Thomas’ delivering its contemporary message of defiance in the face of intolerance, inhumanity and murder. Thomas might be Everyman but there is an Archie Gemmill shirt too and Match of the Day, for there’s the entertaining conceit – if you like football – of Thomas as a player who is beginning to make a name for himself. Archie Macpherson analyses his game while Thomas sets about committing offences. A short story by author James Robertson is credited as providing inspiration for this ‘brutal comedy with songs’; just possibly his ‘Portugal 5, Scotland 0’.

The songs are intense, all the more so when set against wicked ensemble work and vivid backcloths. Consequential lyrics, expertly crafted, are by Oxford Professor of Poetry Simon Armitage and musical direction is by composer Iain Johnstone, who is also on stage and does his ‘turn’ as Thomas and as penitent John Fraser, who picks up a yellow. There are eight performers and there is a lot of music making, if it’s only a moaning wind from a piano accordion. Listen up for Thomas’ ‘Rhapsody of Nonsense’ sung by Hannah McPake that really puts the boot into the Divinity – and gets him red-carded. As for Charlie Folorunsho’s ‘Our God above is a God of Love’, that is a LOL belter to grimace at.

The referee plays a blinding, prosecuting role that shouldn’t be his to play, of course; but then Thomas is monumentally unlucky with officialdom. It is bad enough that the chief witness against him is his friend Mungo Craig but to have the Lord Advocate James Stewart (Dominic Marsh) in charge is one hell of a sad joke. Stewart, himself indicted and condemned for treason and author of ‘The People’s Right to Defend Themselves’, characterises himself as the ‘rat catcher’ and is a problem for writers Told by an Idiot. The company excels in creating theatre that is larger than life but wily Jamie has an outsize history all of his own and it is his story, rather than poor young Thomas’s, that often starts to claim the audience’s attention. Still, the result of chronicling the two lives is an inventive, fluid and colourful montage that – you could say – is nearly always on the ball. Only in the second ‘half’, when Aikenhead moves onto exalted ground, with Messiah status and personal glitterball, does it get stuck in an heroic, almost self-regarding mode. There’s a call to freedom in there in an African strain that director Paul Hunter is obviously keen to liberate but I found it more distracting than helpful.

And there you have it: in I Am Thomas the lauded Scottish Enlightenment (not Harry Lauder) stays in the dressing room. What’s on stage is uglier, funnier and shockingly legitimate.

Go to the Lyceum theatre, to the National Theatre of Scotland and to Told By An Idiot