“A remarkable performance, as unsettling as it is astonishing”

Shadows cast? Shadows fleeting? Shadows lengthening? Take your pick as you find your way back and forth through the many scenes of Chris Hannan’s timely play upon the redoubtable life of Enoch Powell (1912 -1988), for whom – archly – it is ‘in fog [that] you feel England all around you’. As it is what you see is a beautiful copse of silver birches.

This is the standout Birmingham Rep’ production from 2016 directed by Roxanna Silbert. Ian McDiarmid (Powell), Paula Wilcox and Waleed Akthar reprise their roles. McDiarmid, especially and importantly, gives a commanding performance as the radical, absolutist Conservative whose proudest, indisputable claim was that he always spoke for his constituents of Wolverhampton South West, and as their MP from 1950 to 1974 that meant speaking his formidable mind about immigration. For the classical scholar, poet, and theologian whose idea of total Englishness was ‘sunken lanes in Shropshire’, immigration is as unpoetic – but as necessary – as it gets. Lamentable too. For Powell’s close friend, local newspaper editor and Quaker Clem Jones (Nicholas le Prevost), ‘England’ is more subtle – ‘Gary Sobers bowling his slow Chinaman’: surely one, nowadays, for the British Citizenship Test.

What Shadows moves between 1992 and 1967/68. Powell’s notorious ‘Rivers of Blood’ speech, that closes the first half of the play, was given at a Conservative Association meeting in Birmingham on April 20 1968. Twenty-five years on two feuding Oxford history lecturers, one black, one white, Rose Cruickshank (Amelia Donkor) and Sofia Nicol (Joanne Pearce), see a research paper, maybe a book, contextualising that speech, interviewing Powell, and hitting upon Insights-to-Racism-and-How-to-Stop-It. Parody did not seem far away, particularly in their self-righteous, point scoring tones; and they’re certainly no match against Powell, even at the end of his life and shaken by Parkinson’s. 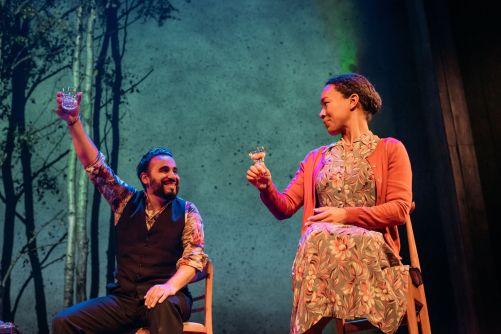 Ameet Chana as Sultan and Amelia Donkor as Joyce Cruickshank

Hannan’s invention is both amusing and accurate. 1967 is a Powell picnic, with his wife Pamela (Joanne Pearce) at her supportive best; it is also a hostess trolley at an awkward New Year’s Eve party, where Grace Hughes (Paula Wilcox) is a white landlady of two Punjabis, the gauche Saeed (Waleed Akthar) and the jovial and appealing Sultan (Ameet Chana), whose war service in Burma included learning ‘I Love a Lassie’ from the 1st Battalion Seaforth Highlanders. 1968 is the Powells leaving an RSC production of ‘King Lear’ at Stratford and being buttonholed by Sultan. “England must be cured of Empire” pronounces Enoch. There’s even a passing reference to the late and great Alan Howard.

In this show, though, it’s Ian McDiarmid whom you must applaud. It is a remarkable performance, as unsettling as it is astonishing. Go to Youtube for Michael Cotterell’s 1995 film portrait of Powell, ‘Odd Man Out’, and realise how close the actor is to his subject. Obviously the words, their clarity, and the curiously accented speech can be the same but there is the tight smile, the nodding assent that is as sympathetic as it is probably dismissive. Powell nearly usurped the Tory party on principle and McDiarmid shows how he did it, without quite turning the man into the near demon / archangel of the Left and Right respectively. Enoch in carpet slippers and dressing gown is still the insurgent and not some benign ambassador for the National Trust.

The ending looks to the future, to whatever England makes of itself. It probably has to be a tad romantic and suffused with colour to offset the gloom of the present day.

Visit Edinburgh49 at The Lyceum archive.