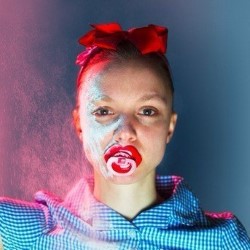 “I reassessed how people treat me in relationships, and as I have childlike attributes to my body – I realised that I can often be infantilised without realising this is happening.”

WHAT: “Hey baby! Welcome to a world of knee socks, bunches, lollipops, bubblegum and models adopting the childlike expressions of six-year-old girls. A daring exploration into the paradox of living in a society that continues to infantilise women. Paedophilia is not OK yet fetishised images of women as prepubescent girls are. In this brave and outlandish performance a grown woman attempts to be your baby to discover if innocence really is as sexy as we’re told it is. Winner of the Autopsy Award 2018.”

Yes this is my first time performing at the Edinburgh Fringe.

Being awarded The Autopsy Award by Summerhall for 2018 has probably been the biggest thing to happen to me since festivals ’17. This has motivated me to take the steps to stage the production on a bigger scale than I have ever tried before. Another big achievement was being selected as one of Sir Tom Hunter’s 100 Disrupters ‘positively disrupting Scotland’ for staging Baby Face.

Baby Face is written by myself, produced by Jack Stancliffe, with sound design from Glasgow based musician, Zac Scott, and lighting design by Michaella Fee Rossi. I have been friends with Jack and Zac for a number of years, after meeting and studying together on the Contemporary Performance Practice course at The Royal Conservatoire of Scotland. I came to know Michaella through watching various productions she had designed lighting for. So, generally, I met the team through the Glasgow arts scene.

There was a few different inspirations I had for making Baby Face. A couple of years ago, I read Blake Morrison’s, ‘As If’, which is a journalistic account of the James Bulger trial. In this book Morrison discusses the meaning of childhood innocence in our world today. I was thinking a lot about power dynamics and moral boundaries surrounding this area. At the same time as this I reassessed how people treat me in relationships, and as I have childlike attributes to my body – I realised that I can often be infantilised without realising this is happening. I started to think about the implications of this on a bigger scale, what is it that attracts us to innocence/the infantile, and what does this mean in terms of our moral codes in society?

The show has been performed in various versions since I created it in 2015. It has been performed in earlier stages at In Between Time in Bristol, Camden People’s Theatre in London and Buzzcut Festival in Glasgow. The show continues to change, as my relationship to the subject matter and form changes. Right now I am very interested in how to show complex psychological and emotional ideas through movement and sound. I am also interested in the pop culture references that infantilisation brings up, and the commercialised and consumable version of infantilisation that most people might be familiar/which on a deeper level could easily be seen as paedophilia. I am interested in exploring where we draw the moral boundaries between these things being acceptable or being reprehensible. I am interested in working with more UK contemporary performance festivals and venues, to find out what other contexts this work could exist in after the fringe.

I am really looking forward to seeing VOID at Summerhall by Mele Broomes. Mele is an incredible physical performer, and her take on J.G. Ballard’s Concrete Island looks to be visually and sonically mesmerising! I also think that European Citizen Pop Song at Summerhall looks to be very interesting too, and adding something new to the conversation on how Brexit is impacting culture. People should also go and see Live Art Bistros 12 hour marathon of performance art at Zoo, as it is rare to find appropriate contexts to perform durational/one on one/action based performance art at the fringe, and this might just be it!