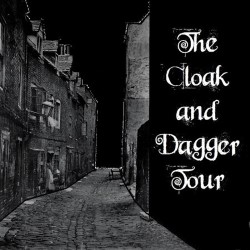 “We are a tiny freakish History obsessed baby that has come out screaming into the world.”

WHAT: “Dive into the horrors of history in our immersive walking tour and show. Explore the darker side of history and end the night with a performance of a true story of murder and revenge bringing history to life!”

As an event, absolutely!

We are a tiny freakish History obsessed baby that has come out screaming into the world.

However as visitors no. Such a beautiful city!

I would love to say, setting up the company. Winning a Certificate of Excellence Award from Tripadvisor. Falling in Love…

The entire experience (Tour and Show) evolved and revolve around a true story that just fell into my lap.
I have always been somewhat of an obsessive when it comes to history so when I came across this 18th century, true story of murder, revenge, in the backdrop of war, all focused in a heart to heart conversation between two people, I was shocked!

“How has this never been done before!”

I spoke with the family and they told me they never spoke much about it as they found it quite personal and it was then (surprisingly!) they asked me to make something out of it. They had seen some of my work in the past and asked if I could write a play based on it. I felt quite a big burden of responsibility.
Things changed as I wrote it though. I maintained historic accuracy, and language as much as possible (under the vicious scrutiny of two historians fact checking me) but so many times I came across something which angered me. I realised that the story unfolded the more people would miss the true in-depth significance of the history.

I thought about creating exposition within the text (like some sort of historic, native advertising) but it just diluted the visceral nature of the story.

That’s why I designed the tour to add as a precursor to the show and create an experience that could be all encompassing for the history that we were trying to tell.

We released our first one in London, more as a one off event, however it did so well that we decided to start again the following summer. We did well enough to get recognition from our Tripadvisor reviews and ended up winning the Certificate of Excellence Award.

Then the wonderful @the1Stefania actually came to see us and stayed behind a while after the show and convinced me to bring it up to the Edinburgh fringe. Which now we have done and have designed a tour specifically for Edinburgh, that will hopefully disgust, shock and delight many a person.

So overall I would say the company came together out of a passionate desire to tell the side of history that does not get told.

We will be in London where we have another Tour and we will be releasing another next year that takes a very different focus but still about unspoken history.

What more need I say.