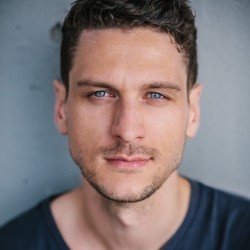 “I was nominated for Best Newcomer in my first year in 2014.”

WHAT: “The electrifying new show from the gifted character comedian and improviser. Nominated for both the prestigious Barry Award and Edinburgh Comedy Awards Best Newcomer, Steen’s live shows are a ‘triple threat of performance, material and charisma. A flawless hour of comedy’ ***** (Herald). As seen on Top Coppers (BBC Three), Whose Line is it Anyway? (ABC Australia) and Steen Raskopoulos’ Scare BnB (Sky). ‘Unique and completely hilarious and life-affirming’ ***** (New European). ‘Technically astonishing and emotionally fulfilling’ ***** (List). ‘An inspired and utterly original stand-up’ **** (Sunday Times). ‘Like witnessing a talent explosion’ (Independent).”

It is not, it’s my fourth show. I was nominated for Best Newcomer in my first year in 2014.

I went to the World Cup.

I wrote it. Underbelly are producing it. Tom Parry directed it. It premiered at the Melbourne Comedy festival and then the Sydney Comedy Festival where it won the Director’s Choice Award.