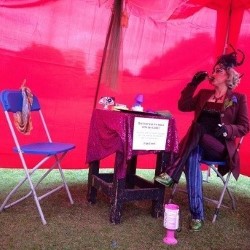 “There’s a mystery, a dance, a bit of magic and lots of jolly nonsense.”

WHO: Naomi Paxton, Writer and performer

WHAT: “Variety! Comedy! A psychic duck! Join 2018 NATYS winner, Ada Campe, for a show about wonderful women, strange encounters and a fairground mystery that occurred on the Welsh coast many moons ago… ‘Extravagantly mischievous persona… brilliantly crowd-pleasing act’ (Chortle.co.uk). ‘Resembles an unhinged super-villain’ (Diva). ‘Sorcery wrapped in the kind of storytelling that would make Scheherezade jealous’ (Kate Copstick).”

No, I first performed at Edinburgh when I was a student at the Royal Scottish Academy of Music and Drama (now Royal Conservatoire of Scotland) in Glasgow in 2001. Since then I’ve been back as both an actor and as a magician’s assistant in various shows… but performing as Ada Campe is definitely the most fun I’ve had at the fringe so far!

Ada Campe came Top of the Bill at the 2018 New Act of the Year Show (NATYS) – the third woman to have done that ever! She also won the 2018 Old Comedian of the Year competition, held by the Museum of Comedy. It’s never too late to be discovered!

The show is about Ada’s experiences of working at a funfair when she was younger – and how the women she met have influenced her career. There’s a mystery, a dance, a bit of magic and lots of jolly nonsense. It’s variety, comedy, magic, cabaret, and good fun!

I wrote the show and have produced it too – there have been previews in London and I’m now raring to release Ada Campe and her Psychic Duck on Edinburgh. I’d love to take her on tour afterwards…