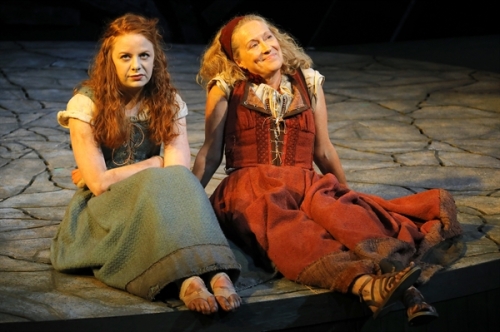 Fiona Wood as Helen and Deidre Davis as Janet Horne

“Gendered and topical sparks do fly but at its heart the story stays human, withering, and of its period.”

Put an eighteenth century clergyman in a Scottish play and you know the Enlightenment is going to be disputed. Put him alongside a buff Sheriff with silver buttons and you can be reasonably sure that a woman is going to cop it. Introduce the Devil and you’ll soon be smelling hellfire in the morning, rather than peat.

Welcome to Rona Munro’s The Last Witch from the 2009 Edinburgh Festival. Firebrand Theatre with director Richard Baron stoke it up in its first half and then let it blaze in the second. Gendered and topical sparks do fly but at its heart the story stays human, withering, and of its period. In 1727 Janet Horne of Loth parish, Dornoch, widowed mother of seventeen year old Helen, is accused of witchcraft (as was Helen), is locked up in the church tower, deprived of sleep over four days, confesses, is put in a barrel, is smeared with tar and set alight. She was the last person to be executed for witchcraft in the British Isles.

Munro’s Janet, Deidre Davis, is much younger than the real Janet. Youthful, outspoken and defiant, she takes the Sheriff, David Ross (David Rankine), to her bed with no difficulty at all. She’s playful, brazen, and imaginative and is happy to have all believe that she ‘can do great magic’. However, ‘nothing so bad ever happens’, says an exasperated Helen of her mother, until the Sheriff – with his clothes back on – decides that she’s a shameless besom.

Whatever Janet’ skills with medicinal and intoxicating herbs she has not used them to meet the Devil. No, that trick is practised by Helen (Fiona Wood) who finds a long haired tinker who fits the part admirably in a teasing, clever performance by Alan Mirren. Strange then that the mood music before the play starts seemed to be a serenade for strings and not ‘The Deil Amang the Tailors’. There is fiddle music and dancing but the lightness of the piece is in Janet’s levity and in its choice moments of humour: the timing of neighbour Douglas Begg’s ‘Ye al’ right there, Janet?’ and how even Old Nick is afeart of crossing the border.

The second half is all about the irony of praising the Lord whilst being hauled and chained in ‘His’ kirk. Naturally it has more energy but, looking back, I missed the slow and poetic attention to the lives of crofters – the regard for rocks and shore, the bees, and the ‘wee, sleeping, safe creatures’. Perhaps that’s the point: the harsh, outsize opposition of law and order and church session to the defenceless and the wronged.

An all-seeing ‘eye’ is suspended over the crazed circle of the stage floor. It works well in this magnification of a sad, small story that still says a great deal and that manages to end affirmatively.

I have seen Firebrand productions before and this is another very good one.

Go to Edinburgh49 at the Traverse archive.