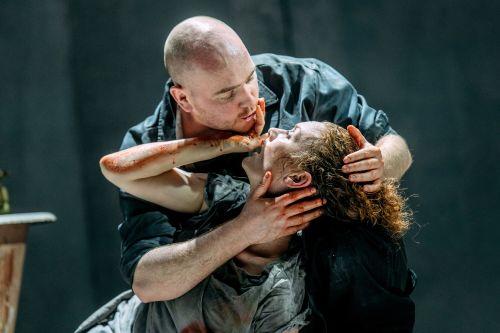 “A swingeing attack against inequality and injustice … with gouts of blood”

Observe the bold italics: ‘The Duchess (of Malfi)’ after John Webster. Zinnie Harris’s compelling adaptation of the Jacobean tragedy has all its drive and grip, most of its heritage schlock, and some – but not much – of its superb, excoriating language. Never mind, Harris’s script is smart and disturbing in its own cause. Webster may turn in his grave but it would be a satisfied, pleasurable shift rather than a squirm of revulsion.  The great roles are there, just beneath the modern skin: the blameless Duchess; the depraved Cardinal; Bosola, the loyal creature  – all in the service of raging truths.

Yes, twin babies are gently rocked in their parents’ arms but the lullaby is ‘a slightly fucked-up version’ and love is defenceless. Back in Webster’s script of 1614 Bosola tells the Cardinal that

‘When thou kill’d’st thy sister,
Thou took’st from Justice her most equal balance,
And left her naught but her sword’.

Harris’ plot and Harris’ direction do the same, losing moderation, going on a swingeing attack against inequality and injustice. The bad comes first and it’s really bad. The Duchess, Giovanna, remarrries. Her two brothers, the Cardinal – utterly depraved – and Ferdinand – psychopath – find out and destroy her as ‘soiled goods’. Antonio, her husband, would avenge her but merciless killing is not for him. That’s more in Bosola’s line. However, watch the brooding Bosola, listen to him, for it’s a rewarding exercise and when the good comes out he’s your man. It is an extraordinary ‘turn’, beyond even Webster’s philosophical villain, and very well done by Adam Best.

If Bosola surprises, the Duchess inspires. She opens the play alone, centre stage, in front of a microphone and her audience. Her own story closes in around an excellent performance by Kirsty Stuart. Amused but all too aware of her brothers’ appalling misogyny, she is mischievous and loving with Antonio, craving and then burping  apricots during her pregnancy, and heroic – immortal – at her end. The two other female parts, Cariola (Fletcher Mathers), Julia (Leah Walker) suffer, fall – and rise – with her. 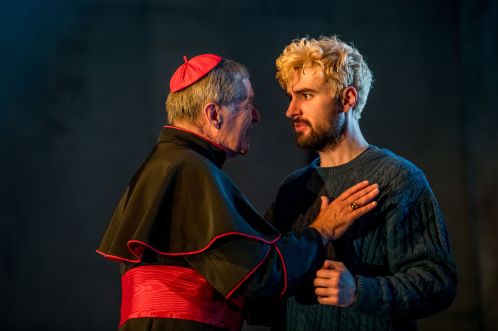 George Costigan as the Cardinal & Angus Miller as Ferdinand

The ghastly Cardinal is played by George Costigan, whose command of his lines is probably only matched by the respect he has for them. It would be a virtuoso performance except that to assign ‘virtue’ of any description to this demon would be too much. At least Angus Miller as the sick and puerile Ferdinand has howling lunacy on his side.

While she lives the Duchess has precious little freedom. If her brothers cannot control her, they can certainly contain her. Tom Piper’s set is a high undressed space, bleached stone white, with a gangway across its width. Sliding grillwork enforces the impression of prison and the basement bathroom provides a convenient torture chamber where standing mikes are used to address the prisoner. High voltage jolts frazzle the nerves throughout. Two songs offset the fear but still seemed out of place; worse, for me, was some foot stomping and an immediate association with the comic gospel strains of  ‘O Brother, Where Art Thou?’, which was unfortunate.

There are inevitable moments of jarring tone and effect, when modern idiom and thought collide with the Jacobean. “I’d kill the bastard who did this to you, the fiends” could be left unsaid but I’m all for the gouts of blood, the powerful re-writing, and the electric challenge of the closing caption.

Go to The Duchess (of Malfi) at the Lyceum

Read Edinburgh49 at The Lyceum archive.