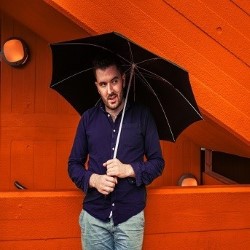 “Lyn Gardner … name-checked me as “a young actor of promise”, so yeah, basically, dreams can come true.”

WHAT: “Doug Crossley’s solo show brings together songs, comedy and the heartache of trying to understand a friend’s suicide. It’s happy, sad and sometimes silly. It’s a life-affirming love letter to shared moments in a theatre.”

It is my first show as a writer and performer. I have performed at the festival before (ten years ago – shit!) and along with a full run in an “adventure comedy” (still not sure what that is) that fringe included a twenty-four-hour rapid response written piece about Fred Goodwin who had at the time just heralded RBS’ spectacular fall into nationalisation. That was a collaboration with Stephen Moss who was writing an article for the Guardian. He dragged Lyn Gardner along to review it and she gave it one star but name-checked me as “a young actor of promise”, so yeah, basically, dreams can come true.

Oxford Playhouse (and Louise Chantal specifically) decided to produce my debut solo show. That’s a bloody big deal for me. I’ve been hustling my way in this industry for a long time so to have a bit of backing from them is very new and very cool. The show has also been supported by Pleasance Futures as part of the Regional Theatre Partnership Programme. It’s a deeply personal show so having some help has made it feel possible to keep taking the risk to tell this story. I’m ridiculously excited/terrified about the whole thing. I also learnt to play the piano to do this show, which has been fun and a cheeky little challenge for my mid-30s brain.

My show is called GIVE ME ONE MOMENT IN TIME. Written by me (Doug Crossley). I was on attachment as a playwright at Oxford Playhouse and immediately before the programme began I found out my friend had died. She wasn’t my best friend, but she was a deeply formative friend. I’ve spent a lot of my time as a playwright (10+ years) writing about trauma, shame, addiction, and most poignantly suicide. My friend took her own life. So, I spent most of my time on that attachment programme feeling angry, confused, and all the other feelings that come with grief. I used to think the theatre could save the world. I didn’t anymore.

Consequently, I really threw my toys out for the pram and didn’t want to write another play. John Retallack, who leads the programme, really championed this mini theatrical rebellion I was in and challenged me to just write. Since I’d “quit” writing plays, I played the piano instead. I took lessons and as I became a human being again I started to write songs. They were observing this one moment in time. Eventually, those songs started to weave a story. That story became this play. It’s a solo show, a musical I guess, about loss, grief, and anyone who ever had a mate that they dreamt big dreams of putting shows on with. It will premiere in Edinburgh this year. 2.50pm, Jack Dome. First Edinburgh. Next? The world.

Go see anything, and everything. At all hours of the day. That’s what I plan to do. I’ll be seeking out my other solo show compadres to compare notes and war wounds. I’m not able to recommend those shows yet because I don’t know what they are. But some others I’ll definitely be checking out are Spencer Jones, An Audience With Yasmin Day, and Bryony Kimmings.