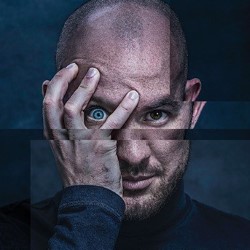 “The audience are on headphones and most of the sound design is binaural, which adds a lot to the immersive experience of the show.”

WHO: Tiia-Mari Mäkinen, Co-creator and performer

WHAT: “Your daughter is missing. You are the only one who has not given up the search. You hear voices. They guide you. They also haunt you. Will you surrender to them? Or will you shine? Hippana Theatre invites you to the distant recesses of the mind to meet the stranger inside you. How much do we know about ourselves? Are we not one person, but many? SHINE is an immersive psychological thriller that blurs the senses and tricks the mind into feeling what might not be there.”

This is our third venture to the Fringe Festival. The first time was at the PBH free fringe, performing in a small room somewhere in the bowels of the city. The second time was at The Pleasance. Both were fantastic experiences.

We adopted a mentally ill kitten. And I don’t mean that as a hyperbole… he’s actually neurologically insane. We are afraid of going to bed at night because he likes to torture our faces while we are sleeping. So we are just not sleeping very much this year.

The show is devised by us, a real life married couple and we also run Hippana Theatre. It’s about a man who goes mad after his girl goes missing. He starts hearing voices. The audience are on headphones and most of the sound design is binaural, which adds a lot to the immersive experience of the show. It’s called SHINE (bit of a reference to “Shine on your crazy diamonds” by Pink Floyd) and it is produced by the excellent From Start to Finnish production company.

Our company is called Hippana Theatre. The founding members of Hippana met in Brussels and we devised our first work in the mayor’s assembly room in a small town in Sicily called Prizzi (Greek name is Hippana). Shine will premiere at the Fringe although we did 2 previews at Chickenshed in May. We have our fingers crossed for a national UK tour after the festival.

Go see “I’m a phoenix, bitch” by Bryony Kimmings, “dressed.” by ThisEgg and “Electrolyte” – all beautiful and powerful shows. And check out the fabulous From Start To Finnish program for 2019 Fringe: they showcase the best of Finland’s theatre scene at Edinburgh. Also Big In Belgium program has some very interesting stuff!