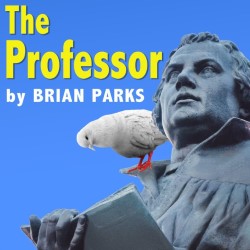 “For me, the Edinburgh Fringe opened up a career’s worth of opportunities to work in the West End (12 Angry Men with Martin Shaw) and Australia, New Zealand, Germany, Holland, Ireland and Canada.”

WHAT: “The university’s oddest professor has made a remarkable discovery. He’s thrilled – but why is his lecture today even stranger and wilder than ever? An odd, surreal comedy about Dickens, shipwrecks, the Venus de Milo, fainting poets and the perils of original thinking. By two-time Fringe First winner Brian Parks. Performed by Stage’s Best Actor David Calvitto. ‘A brilliant piece of writing’ (BroadwayWorld.com). ‘There is no American writer more thoughtful – in an explosive and surreally comic way’ (Scotsman). ‘Calvitto is one of the funniest, cleverest performers around’ (Herald). ‘One of the most-admired actors on the Fringe’ (Scotsman).”

This will be my 15th year performing in the Edinburgh festival. Several times – including this year – I have acted in 2 or 3 different shows per day. I’m a masochist in that way. I think Phil Nichol and I are neck-and-neck in the contest for who has performed the most shows in the fewest years.

For me, the Edinburgh Fringe opened up a career’s worth of opportunities to work in the West End (12 Angry Men with Martin Shaw) and Australia, New Zealand, Germany, Holland, Ireland and Canada.

I guess I’d have to say two things. First, I had the great pleasure of working with London’s Secret Cinema company on an amazing production of Bladerunner. Such an amazing cast and unforgettable production. The other was the two days of filming on the new Kingsman film with Ralph Fiennes coming out later this year.

The Professor is a solo-show about a very eccentric teacher giving his farewell talk. His perceptions of the world and views of history, art and the sciences are outlandish and very, very funny. Let’s say he’s a highly original thinker who also happens to have a lot in common with his many four-legged friends.

This will be the 7th show I’ve done with the writer of ‘The Professor’, Brian Parks. He’s a two-time Fringe First winner and a friend and collaborator of 20 years. We had a great run of his play, Americana Absurdum, in London at the Menier Chocolate Factory after winning the Fringe First in Edinburgh.

We’d like to take it to London afterwards and then maybe Australia, but we have to prove our mettle here first!

The other play I’m doing this year is called Judas. It’s written by and also stars Tim Marriott, who made a big hit with Mengele two years ago. I get to play a baddy in this one. No, not a Roman with a spear. None of that in this one.

I want to see The Shark is Broken by Ian Shaw. Ian plays his father Robert Shaw in a behind the scenes look at the making of Jaws. Also, Stand Up Poet starring Gavin Robertson at Old Assembly Close, and Lucy Farrett: Lois which is at Underbelly.