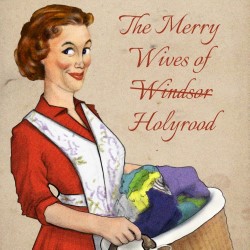 WHAT: “An uproarious tale of marriage, mischief, jealousy, lies and laundry. Set around Page’s Steamie on the Windsor Estate in 1950s Edinburgh, Falstaff woos two women in an attempt to swindle their husbands and regain his squandered wealth. The wily wives see through him, however, and plot their hilarious revenge. Meanwhile, Anne is pursued by two unlikely suitors, each one approved by her respective parents. But she prefers another. Will true love prevail? Will Falstaff get his comeuppance and mend his ways? And will Ford ever accept that wives may be merry yet honest too?”

WHERE: The Royal Scots Club – The Hepburn Suite (Venue 241)

I was brought up in Edinburgh, went to Uni in Edinburgh, then left to wander around the planet for a while. But the call of home was loud and insistent; I came back in 2008, and have been involved in Fringe productions ever since, mostly as an actor. This is my first time directing for the Fringe, so I’m especially excited. The Fringe is just the best time of year in Edinburgh. The atmosphere is unique – absolutely buzzing with life and creativity; the town literally does not sleep at all during the month of August. I love that there is something to suit absolutely every taste – and wallet! The whole city turns into a stage, and it’s such an incredible festival to be a part of, whether as a participant or as a spectator. It’s amazing to be able to be both.

After EGTG’s Fringe run of Much Ado About Nothing (dir. David Grimes) last year, we took the production to Stratford-Upon-Avon to perform as part of the Royal Shakespeare Company’s free summer programme at The Dell. I was Stage Manager. It was completely different to performing at The Fringe, and a once-in-a-lifetime chance (or so I thought) to be involved in putting on one of Shakespeare’s plays in his own hometown. I am delighted to say that EGTG’s Merry Wives of Windsor has been invited to participate in the 2019 Dell Space summer programme, so after our run at the Fringe, we’ll be preparing to take the show to another, different audience.

The Merry Wives of Windsor is one of William Shakespeare’s lesser performed comedies, but in my opinion, the funniest. It’s also one of The Bard’s most accessible pieces – it’s mostly prose, and the humour is very visual. I’ve loved the play for years but never thought of directing it until I went to see a production of The Steamie a couple of years ago. I had a lightbulb moment: that set would be perfect for The Merry Wives! And so the obsession began.

This production of The Merry Wives of Windsor is set in and around George Page’s Steamie in 1950s Edinburgh. I hope the audience will bring their chuckle muscles, and enjoy a thoroughly good giggle at Falstaff and his merry friends as they wash their dirty laundry in public. After we’ve finished at The Fringe, we’re off to Stratford to see what the audience at the Royal Shakespeare Company’s Dell Space makes of our “Holyrood Wives”.

EGTG has been putting on productions at The Fringe for decades. Founded in 1954, the group has grown from strength to strength and brings together people of all ages from all backgrounds to produce a diverse collection of shows. I’ve been working with them since 2015.

EGTG is also staging Mark Ravenhill’s pool (no water), directed by Abbye Eva. It’s on right after our Merry Wives, in the same venue. Why not make it a double bill?

The week after us, Arkle Theatre is taking over the Royal Scots Club venue. Jenny Tamplin is directing Clare McIntyre’s Low-Level Panic, and David Grimes is directing Shakespeare’s The Taming Of The Shrew (12th-17th August).

There’s so much to see. Even a walk down the Royal Mile is an entertaining day out! Take all the fliers; talk to the characters you meet on the streets – sometimes the best shows you see are those you choose on the spur of the moment.