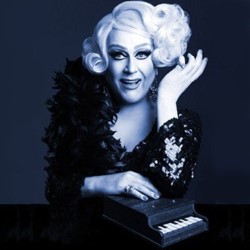 “I did a show many, many moons ago when I was a teenager. I had an awful argument with the woman I was doing it with and we didn’t talk for the length of the run. We were sharing a flat with HER HORRENDOUS MOTHER (dear God) who wasn’t talking to me either!”

WHAT: “Join comedy cabaret superstar Miss Hope Springs at the piano, presenting original musical numbers from her vintage repertoire of toe-tapping show tunes, finger-snapping pop and heart-rending ballads, interspersed with scandalous stories from her ‘Ritz-to-the-pits’ showbiz life in LA, Paris and… Dungeness! Still in the sequins she fled the Pink Pelican Casino wearing in 1972, let Hope (once the toast of Vegas, now down on her luck and heavily medicated) take you on a trip down ‘mammary lane’ in this ‘smash hit laugh-out-loud-move-you to-tears show’ (BroadwayWorld.com).”

Well, I’m thrilled to say this is my first full run, and in one of the top venues too! I did a show many, many moons ago when I was a teenager. I had an awful argument with the woman I was doing it with and we didn’t talk for the length of the run. We were sharing a flat with HER HORRENDOUS MOTHER (dear God) who wasn’t talking to me either! it was a total nightmare. I was only 18 at the time.

In 2014 I brought Miss Hope Springs to The Edinburgh Playhouse, The Boards but that was a ‘blink and you’ll miss it’ 6 show run but it was a big success. It’s taken me this long to really have the time to put into it as it’s such a mammoth task…isn’t it? I have to say the team at The Assembly Rooms and The Fringe Society have just been simply amazing.

Being the support act for Marc Almond at The Apollo Hammersmith and sharing the bill with him and fabulous Immodesty Blaize. I love Marc’s work so it was a real thrill to be asked. The other acts that have been part of that season are Burt Bacharach, Joss Stone and George Benson…So it’s pretty good company to be keeping.

Miss Hope Springs was once the toast of Las Vegas. Now she’s down on her luck and highly medicated. As Hope, I play the piano and sing songs from her vintage repertoire of finger-snapping pop, smouldering torch songs and toe-tapping showstoppers. Broadway World kindly called it ‘The smash-hit laugh-out-loud-move-you-to-tears show’ and Julian Clary insists it’s ‘Tragi-comic genius’. But you really have to see it for yourself to judge. I think it’s safe to say it blows all the stereotypes about ‘drag’ out of the water. All the music is mine, the lyrics and the dialogue too and I play the piano and sing live and tell stories from Hope’s Rits to the pits life in LA, Paris and erm…Dungeness! (where she lives in a camper van with her ex-husband Irving and his close hairdresser pal Carlos).

I’ve been writing songs all my life and had my first publishing deal in my early 20s (signed to Elton John’s Rocket Music.) Then I created my alter ego, fading glamor-puss Miss Hope Springs and appeared at The Brighton Fringe and went on to win Best Cabaret there 2011. Then I moved to London and have been resident at Crazy Coqs/Live at Zedel ever since. In 2017 I toured Miss Hope Springs around the UK with her ‘The Devil Made Me Do It’ show and have also toured the USA with it. I’ve even performed a solo sold-out show at The Wigmore Hall in London (which is the next best classical venue to The Albert Hall).

I also direct it, and it ‘s produced by Vaudelesque Productions (if you can pronounce that you get a free gift) which is my production company. I created it for my shows as Hope and the more autobiographical shows I do as myself playing the piano and singing my original songs and talking about my childhood growing up in Hollywood (my father was the late British character actor Lionel Jeffries) and also my original classical piano music, which was recently featured by Suzy Klein on BBC Radio 3 Essential Classics. ‘It’s Miss Hope Springs’ show returns to London at Live at Zedel/Le Crazy Coqs in the West End and I’m then taking it around the country.

Probably a psychiatrist! Did you know Miss Hope Springs actually has a support groups for addictees. People literally become obsessed with her and come and see every show, which is extremely flattering. I would certainly say catch Dickie Shelton in his ‘Sinatra Raw’ show and of course fabulous Reuben Kaye wherever/whenever you can catch him.