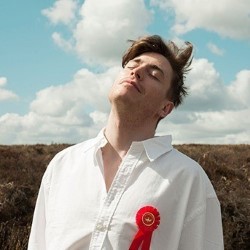 “I don’t drink during the month and get to do a lot of walking so it’s always a sort of a bit of fitness boost which of course I forget about on August 28th when I hit my couch in London.”

WHAT: “This is not a story about the status quo. This is a story about making a change. Xnthony was 12 when he made his confirmation. He was 26 when his home town voted against Ireland’s marriage equality referendum. Gig meets theatre in a moving and hilarious look at how a vote can change the way we view ourselves. Direct from a sell-out run at the Dublin Fringe Festival, this is a poignant pop concert from an award-winning company exploring the relationships we have with the places we call home and the stories they hold. ‘Captivating’ ***** (TheReviewsHub.com).”

This is not my first time at the rodeo and I am so excited to be back at Edinburgh! Every time I get here I take it as a chance to take stock of where I am in my work and my life so it’s always a good marker! It’s also the time I get to wholly spend focusing on seeing amazing work from other artists and really exercising my own skills as a performer. I get really focused and secretly love the structure and intensity of it. I don’t drink during the month and get to do a lot of walking so it’s always a sort of a bit of fitness boost which of course I forget about on August 28th when I hit my couch in London. I also really love meeting all the locals again that I’ve performed for in the past. I’ve built up a great relationship with people in the city and their support is really valued.

Since the last time I was at Edinburgh Fringe with DOUZE in 2017 I was given funding by the Arts Council in Ireland to develop my practice and create this show. I don’t work in easily identifiable categories, so I’ve had to work extra hard to show to big supporters like the Arts Council that I’m not just a nutty, art weirdo (which would be fine!) but someone with big plans and big ideas. Using the funding I’ve been able to focus on the next steps in my work. Right now it’s all about the personal, the rural and storytelling. But soon I’m starting on another new show and that’ll build on the pop world of this show and will hopefully be a show that makes people dance.

The show is a poignant pop concert about how a vote changes the way we view ourselves and where we’re from. Much like the UK, Ireland recently had its own referendum revolution and in 2015 Ireland voted on Marriage Equality. In what was seen as a massive sea change in Ireland’s perceived conservatism the country voted overwhelmingly in favour of giving same sex couples access to marriage. But to my horror and sadness, my home town, Roscommon became the only place in the whole country that voted against Marriage Equality.

The result made me think a lot about my hometown and what it meant to me after what initially seemed like a vote against my identity. So I went back home to investigate and ended up making this show about growing up there and my changing relationship to the place I call home. In the show I talk about my story, my childhood in rural Ireland as a magical, queer child and how that presents its own challenges. It’s an ambitious blend of theatre and pop music which moves between sweeping choral arrangements and some really fabulous Robyn style beats which premiered and had a sell-out run at Dublin Fringe Festival in 2018.

Of course I’m nothing without my team and it’s taken a lot of work from great artists to make this show. Many on the team have a myriad of skills like David Doyle who produces for the show as well as assisting on the writing and designing the lighting! I think creatives can have many different skills so I don’t see why someone can’t have a dynamic, varied role like this. It keeps every day different!

I am super excited to see the new comedy show by comedian Harriet Braine at Gilded Balloon. Harriet does this thing where she’s able merge history and music and somehow make it universal, relevant and hilarious. As a fan of the Eurovision I also have to recommend a fellow Irishman Fionn Foley: his one-man show Brendan Galileo for Europe is whip-smart and hilarious. For those loving a late night out, I am so excited to experience drag icon’s Ginger Johnson’s Happy Place at Pleasance. Wouldn’t you?