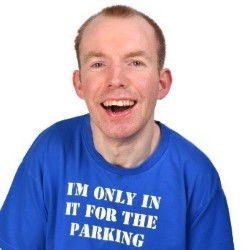 “I’m worrying about seeing my flyers being trampled into the cobbles on the streets of Edinburgh while my hopes and dreams come crashing down on me.”

WHAT: “Following the unprecedented success of his appearance on the final of Britain’s Got Talent 2018, BBC New Comedy Award winner and star and writer of BBC Radio 4’s comedy series Ability, Lee Ridley (AKA Lost Voice Guy) is back at the Edinburgh Fringe. He may not be able to talk but he definitely has something to say and his comedy will leave you speechless. ‘Laugh-out loud funny’ **** (Independent). ‘Savagely funny… he’s a bloody good comedian’ **** (TheWeeReview.com). ‘Consistently hilarious’ **** (BroadwayBaby.com).”

WHERE: Gilded Balloon at the Museum – Auditorium (Venue 64)

This will. be my seventh festival in a row and I’m still as excited as ever to spend some time in Edinburgh. Of course, I’m worrying about seeing my flyers being trampled into the cobbles on the streets of Edinburgh while my hopes and dreams come crashing down on me. But I think the positives of the festival always outweigh the negatives. There’s such a good buzz at the festival, which I’ve honestly never experienced anywhere else in the world. And where else can you catch up with all your mates in one place for a whole month. Granted, Edinburgh isn’t the most accessible of cities for a disabled person like myself, but I do like a challenge!

I’ve been coming up to the fringe to watch stuff ever since I was a teenager, so to come back as a performer is always a real privilege for me. Every year it just seems to get better and better.

Since winning Britain’s Got Talent last year, it’s been a pretty crazy time. I’m busier than I ever was before, as a comedian . I’m on my first nationwide tour, and I’ve also written a book which is out now called ‘I’m Only In It For The Parking.

The general public have been so supportive as well. I’m always getting stopped for selfies, and having people congratulate me. And it has been really nice. I’m very grateful for all the kind words I have received. One of the Best things to happen since I won, is that people are engaging with me a lot more than they would have in the past. For the first time, they seem comfortable talking to a disabled person. I’m used to being stared at for negative reasons, so it’s nice to be stared at for positive reasons for a change.

My Edinburgh show will be a typical Lost Voice Guy show, it’ll be cheeky, mischievous and, most of all, very funny. During my Britains got talent experience, the general public were so supportive of me and everyone has been really lovely since, so it’s going to be nice to give something back to them. I’m excited to meet everyone and I hope they enjoy the show.

It’s basically all about the stupid questions that people ask me. The dumbest question yet is probably ‘have I ever tried to talk just to see what would happen?’. As if I had just been lazy all of my life, and therefore just couldn’t be bothered to talk. Like I was only putting it on to take advantage of the disabled parking. But, In case you are wondering, no I haven’t tried to talk before. Mainly because I know nothing would happen. Besides, I’ve built a career out of not being able to speak now. I don’t think I should be encouraging my voice to magically reappear too much. The found voice guy just doesn’t have the same ring to it.

Aaron Simmonds show is really good, I’ve heard such good things about it, so that’s definitely worth a watch. I’m also looking forward to seeing Tarot, which is a show from the people behind the hilarious Gein’s Family Giftshop. I’m hoping that it’s going to very dark indeed. Finally, I can’t wait to see Micky P Kerr’s show. We became good friends while doing Britain’s Got Talent, and we have a similar sense of humour, so I’m bound to enjoy it.