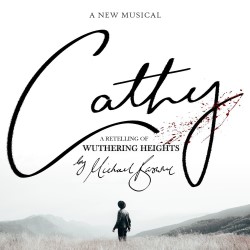 “I also was on a popular Channel 4 reality tv show, although since it hasn’t aired yet, I’m unsure if I’m allowed to say which one!”

WHAT: “This new musical by Michael Bascom retells the story of Heathcliff and Cathy, two soul-bound lovers thwarted by family, society and God. The sun shines over the moors, but a storm of vengeance is brewing in this story of a passionate romance which transcends life – and death – itself. Described as ‘a highly moving production, brilliantly depicting the tragedy and passion of Bronte’s novel’ (TCS), the show sees its Fringe debut after premiering last November to a critically acclaimed, sold-out run at the University of Cambridge.”

I visited Edinburgh briefly last autumn, but this is my first time to the Fringe festival! I was warned that it was ‘a lot’ and I have to say that it’s taken a little while to adjust to the perpetual exhaustion of putting on a show, flyering for a show, and then actually seeing shows, and so on. I arrived with high hopes, having had a surprise mention on Elaine Paige’s show on BBC Radio 2 the Sunday before the festival, although I’ve realised more fully since being here what a slog the Fringe is meant to be. I love a challenge, however, and I’m starting to find myself in my element amidst the madness of it all!

The biggest thing to have happened to me since last year’s festival was probably graduating, finally! I started my undergraduate degree a tad later than usual, at 24, and it was something I’ve always known I wanted to do before starting my career. So it’s a bit weird adjusting to ‘real-life’ after feeling a bit on hold for the past 10 years! I studied music at Cambridge, but being a mature undergrad I got to study at St Edmund’s college with other ‘mature’ (aka over 21) students, where I met some truly incredible people. I also was on a popular Channel 4 reality tv show, although since it hasn’t aired yet, I’m unsure if I’m allowed to say which one!

The show is a ‘retelling’ of Wuthering Heights; I wrote the music/lyrics and adapted the original novel into a script (who am I to change Emily Brontë’s own words?). It closely follows much of the original story, but I’ve altered the second half somewhat significantly to make it a bit more Shakespearean in its gesture, with the real-time events of the tragedy occurring all within a 24-hour period rather than over the course of 30-40 years. I first conceived the musical about 10 years ago when I was 17, being a young, closeted Mormon gay boy, and totally inspired by Heathcliff and Cathy’s tumultuous, passionate romance – putting each other above their own family, society, and even God – I knew I had to set it to music.

I also knew I had neither the talent nor means to pull off a musical at that time, so whenever a song would come to me (usually in its entirety, almost like a ‘download’, on random afternoons) I would just archive it until the time felt right. Finally (having since ‘come out’ and leaving Mormonism), last year seemed to be that time and so I put on ‘Cathy’ at one of the university theatres in Cambridge. It had phenomenal success, so I decided to take it to Edinburgh, although really I still consider it a bit of a showcase for a bigger, full-length musical (and I’m looking for a scriptwriter!). Hopefully, I’ll take it to London after, depending on what happens here in Edinburgh!

A friend of mine has written a show based on Northanger Abbey (called – surprise – Northanger Abbey), which will be on at the French Institute on the 12-13 and 16-24. She’s incredibly talented and the whole team are great – it also received a 5-star review in Cambridge last year! So I would 100% recommend catching that while you can, and it will probably help lift the spirits slightly after Wuthering Heights!