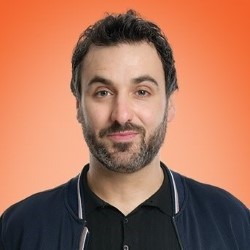 “If the Edinburgh Festival ever stopped, the world would stop too!”

WHAT: “Smart and funny observations on a new-found, middle-class lifestyle with ski holidays, through the prism of poor, immigrant, living-in-a-caravan roots. As seen on The One Show (BBC), Fake Reaction (ITV), Celebrity Squares (ITV). ‘Rip-roaringly funny… fun! Another hour would have suited everyone’ ***** (One4Review.co.uk). ‘Hilarious’ ***** (ThreeWeeks). ‘There isn’t a comic quite like him’ ***** (TheNewCurrent.co.uk). ‘Possesses the rare ability to be hilarious without being outrageous’ ***** (ThreeWeeks). ‘Patrick is a Fringe legend and it’s easy to see why’ **** (Daily Mirror).”

We’ve adopted a baby maltipoo puppy. This is the first year at the Edinburgh festival that me & my partner have a dog with us at the festival & it’s amazing. The dog is so small my partner sneaks him into shows under the inside of her jacket.

This is a brand new hour of stand up, which is a very personal show. It has plenty of jokes and observations in it, but also a lot of stuff about my poor immigrant working-class background, about my life coming from Iran to the Uk in 1980 and about my modern-day life living with my posh middle-class partner. Something for everyone.

You’ve got to see “modern Maori quartet: two worlds” what an amazing show full of talented performers, touching stories & their singing voices are in another world.