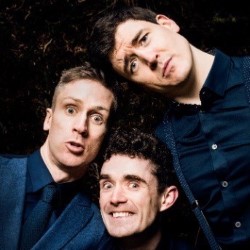 “A tremendously talented bunch who made hard comedy look easy.”

I don’t think I’d ever been to see a Fringe show solo. I usually meet up with pals or drag my children. However, on Saturday, I thought I’d see what solo flying was like and trotted along to the McEwen Hall to see Foil, Arms and Hog.

My only experience of them had been via their cult YouTube clips being beamed into my social media feed from time to time – their ‘’Englishman plays Risk’’ and ‘’Brexit: Divorce’’ being the obvious examples. Beyond that I didn’t know too much about them: there were three of them. I didn’t understand the name. They were Irish. They went to University College Dublin. That was it. My lack of knowledge says more about me than them.

I suppose the old grey matter should have started zinging when I read the words ‘McEwen Hall’. This is one of the biggest venues at the Fringe. It was sold out. There must have been the best part of 1,000 people in the audience. Clearly these guys have a serious following and serious game.

The first ten minutes were gloriously anarchic as the trio romped around the audience getting people involved in various ways: looking in people’s shopping bags, trying on coats, inspecting tickets etc.

It all looked very easy. As with everything, it clearly comes from months and years of practice. You only get that rapport with each other, the quickness of mind, the badinage, the ability to change things up and riff off each other through knowing each other inside out.

In crowd work, it is cheap and easy to mock the audience. Too many comedians do that. Some turn it into their entire act (and some reviewers lap it up. It is like giving the school bully an A grade). Foil, Arms and Hog have fun with their audience but try to make them co-stars of the show rather than the butt of a joke: that involves kindness, confidence and talent. Carmen and Rory – the two audience members who became stars – had a bit of gentle leg pulling but it was all done in the best of humours.

They then break into a series of sketches and songs all of which were clever, witty and laugh out loud funny.  Whilst I’ve bemoaned elsewhere the dreary politics of most comics at the Fringe their Brexit Song ‘’It’s hard to break free from a union’’ was both extremely funny and technically accomplished. If you are going to joke about politics at least try to do something different and witty: these guys certainly did. Their ‘’Guidelines’’ sketch had me in stitches. There was innuendo there but no smut. Again, that takes cleverness and a deft hand.

Each sketch worked well and covered a range of talents – musicianship, clever lyrics, extensive mime and more besides. The sketches ranged across many spheres: a gloriously hammy actor given a secret mission; Ludwig van Beethoven entering a talent show; a recurring stag do sketch; and a brilliant, almost indescribable mime show. My personal highlight was the sheer joy the three actors had particularly when they tried to corpse each other. I enjoyed them spinning off script and teasing each other throughout.

I liked all three of them enormously and did so even more when they bumped into the crowd on the way to the bar and shook everyone’s hand thanking them for coming along. They seemed to enjoy it as much as the fans. They are a tremendously talented bunch who made hard comedy look easy. This was the sort of humour that your teenage nephew would enjoy but also your mother-in-law. That, again, is quite something.

Whenever anyone views a sketch show they naturally begin to compare to the great sketch shows of the past and that terrifying word ‘’Python’’ begins to linger in one’s mind. Many shows are called Python-esque when they are really nothing of the sort. Foil, Arms and Hog are pythonesque in their inventiveness, their cleverness, their interplay and their use of so many different comic tools. I could have watched another hour. A must see.