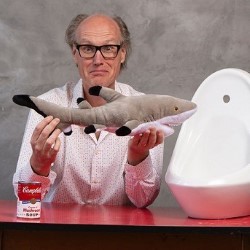 It’s a fairly uncontroversial opinion to say I like art. Art is pretty neat. Van Gogh, Edward Hopper and Monet have pride of place in my apartment, but as far as really knowing anything about art goes, I’m basically like if someone put a dog in a high school class. Will Gompertz, of Tate and Guardian fame, assures me that he can change that in an hour.

Double Art History – The Sequel is a straightforwardly constructed piece: a humorous lecture wherein Gompertz teaches the fundamentals to a crowd of mostly drunk Fringe goers, with a ‘big exam’ as the dramatic raison d’être. There aren’t many shows where I find myself holding a tiny pencil, wondering if a joke is going to be on the test – though, it’s not as distracting as one might think.

And, overall, it works. It works better than one might expect, and that’s not simply down to the demureness of Edinburgh’s day drinkers. Gompertz proves to be a compelling core for a one man show, and brings an energy that’s seldom seen on the Fringe stage. It’s difficult to describe: somewhere south of nervousness, east of smug, and altogether interpersonally compelling. Evidence of his knowledgeability is widely documented, and this show merely adds to the pile. The way he handles the material, the genuinely loving lilt of his voice when describing a form of expression he clearly holds dear to his heart. Whether or not you even like art, Will Gompertz probably likes it enough for the both of you.

And, to his credit, I like art a little more after Double Art History. There’s a wealth of material presented in the short hour, and it’s presented well. Gompertz’ approach is highly accessible, aided by the bare smattering of tech, and almost lulls you into a false sense of ignorant security. If you’re irritatingly curious like I am, you’re guaranteed to have your attention held.

However, this is a show that leans harder on the “lecture” side of its composition, as opposed to the “Fringe show” side. The theatrical elements feel more like artifice than fully integrated parts of the production, and whilst lectures are by no means bad, that visible separation sometimes proves genuinely jarring. Key moments of audience interaction felt as if they had no reason to be happening, other than a misplaced sense of theatrical convention. Whilst playing up the cartoonish theatricality of the whole thing is a boon for marketing, I often found myself wishing I could have just listened to Gompertz talk shop for an hour, rather than listen to setups involving an art teacher who doesn’t exist.

That’s not to say the show isn’t charming. It is, and aggressively so. Gompertz and his crew create an atmosphere where, whilst everything doesn’t go right, it’s not for lack of earnestness. There is a fundamental joy about art at the heart of this show, and it shines clearly.

Double Art History – The Sequel is a fun hour, sitting in the presence of someone who knows their field inside out. Whilst it’s not likely to get your pulse pounding, you might come away with a better appreciation for what it means to make art.