“An elegant and transparent solo piece of dance”

Lately I’ve been coming back to Jonathan Burrows’s handbook and something I read really caught my eye: Simple things sometimes accumulate in virtuosistic ways.

That’s the beauty of simplicity: with few tools we treasure infinite assets. Antigone, interrupted is an elegant and transparent solo piece of dance where the Greek tragedy is revisited through contemporary storytelling.

It is great to see a collaboration that actually depicts Scotland’s reality: heterogeneous, European, international. Under the direction of Joan Clevillé (Catalan), the body of Solene Weinachter (French) orbits around the myth while her voice lies behind, to gently comment about  it with the audience. Sortir-de-soi- the Anagnorisis of the character/performer of Antigone.

French philosophy comes to mind. Solene’s movement seems to deconstruct the levels of the body, unravelling the corps sans organes (the body without organs) of Deleuze, closely linked with the Théâtre de la Cruauté ( Theatre of Cruelty) of Artaud- how the State exercises violence against the bodies, and punishes them (Foucault). Modern Day Catalonia’s situation (just to name one) comes to mind. Young bodies and old bodies getting hit, bodies stretching, bodies longing from freedom. This longing, along with Antigone’s moral fight, is sketched in Solene’s movement when she plays with disruption, intermittence, reassembly, estrangement, awkwardness. The conversation with Creon using her feet while talking is a defiance of power (mockery of modern politician’s gesticulation?). In any case, the way Solene interprets Creon and the Chorus is a clear political parody.

Discovering the revolutionary body, Antigone, interrupted is also an analysis of desire. Desire blooms out of an absence. Freedom and desire are like Eros and Thanatos: they are interdependent. The dynamic and pulse of the choreography is anxious, violent, organic- the character is in Agon, in agony. The body recognises its own existence: it’s corrupted, it’s dirty, it sweats, it squirms, it struggles, it’s exposed, it’s naked, it’s covered, it falls, it rises.

The ritual side of Greek drama (post-modern performance always wants to come back to that moment) is honored on this show. The clever configuration of the audience, oval and on-stage, improves audience’s immersion, like a storytelling session or a foliada around the hearth. Sharing time, just breathing, we meet the Catharsis. Word and movement are completely melted. It’s not just related with time or silence- Solene’s dance outlines her words and her voice structures her movement. Literal body language. Solene Weinachter has, like a friend would say, a Daimon that is shown on her multifaceted skills. The dramaturgy is clearly made for her comedy and naturalness. Despite being a tragedy, we couldn’t stop laughing throughout the show. Through dance, power and old-fashioned narratives can be subverted. Maybe the birth of tragedy was that.

If Fiona Oliver-Larkin had a magic formula for her new co-production with Al Seed, she might have mixed a little bit of Grotowski, Kantor, Alice in Wonderland, then have added some spices and at the end, naturally, loads of salt.

Far from trying to tell a linear story whilst retaining the aesthetics of a tale, Oliver-Larkin elaborates mesmerising scenic landscapes.  A poetic conundrum where the images work as oniric pulses that are splashed on the narrative, flashing throughout the piece: a marvelous and yet threatening house made of wood, salt and crystal; a submarine in a salted blue ocean; a small lighthouse; an indomitable garden where a beast lives; a still life as a graveyard made of wooden spoons; the light of knowledge that illuminates the main character at the last moment, right after a cathartic moment of biting the forbidden fruit.

This solo show with an austere scenography -that asserts the notion of poor theatre– and a noir and avant-garde study of beauty, makes use of dilated tempos to let the audience delve into the imagery (suspension very much appreciated in mime, puppetry or physical theatre). The lack of dialogue was key for the atmosphere of the show, as well as the accurate choice of making it no more than 45 minutes long.

In this fantasy world, where the strangeness and tenderness live together, we can see a little girl who uses her imagination to escape her reclusion, and plays with daily objects that become adventure companions, while an unknown being lives upstairs. The boredom of this normalised prison makes her mind work and boosts her inventiveness, to the point that fantasy and reality are blurred.

There’s a certain crescendo in terms of character’s development: the girl is afraid of beasts and dangers whilst at the end of the show -which is the travel of the heroine- she shows no fear. And that bravery makes her see the light. Plato’s cave, or just growing up?

Highly recommended for both adults and children. 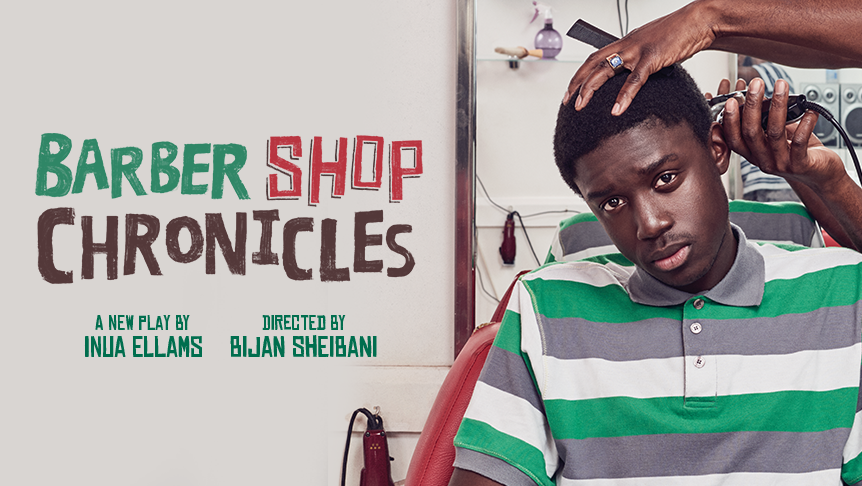 When you enter into the Lyceum, white is the colour that pops into your head. Not a black veil in front of the eyes; not velvet, countless red.

When you grab a sit on the bottom row and see a rather elegant field of white hair, white skin, middle class spectators facing a stage where a bunch of black actors are dancing unbridled and exuberant, owning the whole place at the sound of Afro B… it’s just priceless. For once, you don’t feel in a museum but within a game of contrasts that actually mingle.Visual art at its best.

This storytelling masterpiece is a living example of how an actor actually enjoying the momentum can warm up the audience, let it breath and even feel grateful.

Inua Ellams’ play talks about the affairs of working-class (surprise!) black men through an intimate, tender study of masculinity’s emotional and political anatomy. Stories set in barber shops across Africa, interlinked as threads (wires in the scenography help to create this imagery) pass through the eye of a needle that spins like a hanging globe  – London.

Industrial set design, expressionist lightning and alienating effects remind us of a Brechtian play. Sheibani’s canny direction is not far from that. Articulate expressiveness highlights what Odin Teatret would call the presence of the actor and lives in different kinds of anthropological scenic art – eyes, mouth, hands and feet proficiency-. The homogeneous and impressive cast work is shaped by Aline David (the female presence in the script came to light at the after-show talk, but what about the production?).

Along with the movement, the glowing pulse of the vocal work- phatic expressions, highly marked cadences as if the sentences were sung, voice projection- makes this a great example of what storytelling is. Needless to say, the art of storytelling is to keep the audience interested, and this production managed to keep the energy well-balanced from beginning to end – though sometimes it flirts with devolving into a stream of political or cultural references. Still, that’s what we ultimately want as an audience, to make the brain dance with the play since we cannot -unfortunately- dance on the seats.  Because If I can’t dance to it, it’s not my revolution

An obvious symbol lies on a table at the centre of the stage.

A dead beast as the first actor of an analogy game that unfolds itself like a Russian nesting doll – the monstrous, the wild, the Other, the Mother, the Daughter. A metaphor and, ultimately, a show that rushed like hot blood within a febrile body: hastily.

During a storm in the Canadian mountains, the prodigal daughter visits her mother after a long time to seek answers and amend past decisions.

The attempted analysis of the human passions and post-freudian determinism (which of course condemns women first) with clear romantic allegories (Frankestein, connection between nature and sentiments through sound and light design) fails along the way. A good idea, but unfortunately without resolution.

Director Gareth Nicoll’s taste for Shakespearean, abrupt violence and the delicate language of gestures are as easily seen in this production as his others. But even elegant and attentive direction and fairly competent acting cannot save a flat plot and circumspect script.

A neatly conducted rhythm at the first part of the dialogue becomes a self-explanatory, polarised monologue. Rather than raise drama or empathy, the self indulgent storytelling leaves one wondering if one character is listening to the story or the actress is simply waiting to say her speech.

There’s a lack of tension all the way through the script: the position of power remains always the same, embodied by the daughter, whose acting is quite hectic and leaves no room for audience expectancy at the beginning. Nevertheless, her physical characterisation is superb. The restraint of the mother was sometimes staggered by little details (dramatic hand tics in particular), but the character blossoms once she downs a dram and the actress allows herself to relax.

In short, this is a strong initial concept that craves revision. I hope that it’s returned to, for the simple reason that the idea, the discourse, the creative team’s work and the cast have so much to offer – but, unfortunately, cannot be cured from the restraints of the substandard playwriting.

Maybe the magnificence of a living bear cannot be portrayed if the insides are not beating guts, but soft stuffing.