Where to begin? The official stats say that Edinburgh’s summer festivals this year were their biggest ever, with Edinburgh International Festival selling 19% more tickets than last year, while Edinburgh Festival Fringe shows issued a whopping 2.3 million tickets between them, an increase of 5% on 2014.

At Edinburgh49, following the launch of our dedicated +3 page, we also saw a massive increase in popularity this August, with just shy of 9,000 visits (easily our best ever monthly figure), and a doubling of our followers in the same period. 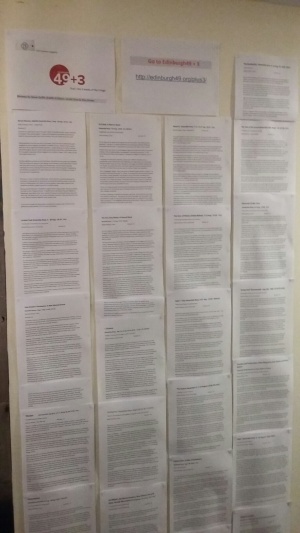 We’re really proud of that achievement, and I would personally like to thank our fantastic team: Dan Lentell, Alan Brown and Jacob Close for their contributions this festival season. Thanks also to our friends at Cult Espresso for their support, and to every one of you – the companies and punters who’ve come to us for informed reviews, and who’ve spread the word far and wide.

Several people have asked me what my favourite shows were from this year, and for me that’s always a difficult one to answer as it’s hard to compare shows across genres. What I learned from Johnny Bevan – a one-man show written and performed by Luke Wright – is definitely up there, as is Doris, Dolly and the Dressing Room Divas – a production conceived in Scotland that I sincerely hope gets the chance to be toured further afield. The Gin Chronicles, Jurassic Park and Promise and Promiscuity were all theatrical hits in my book, while La Meute (which I didn’t review) and Smother were my favourite dance/circus acts. In His Own Write and Aunty Donna certainly made me laugh the most, while Trans Scripts, To Kill A Machine and Out of The Blue’s emotional final show in their current line-up left me sobbing helplessly. Sexy, I know.

It’s certainly been a very different Festival experience for me this year, as my reviewing has taken me to many shows that I would not otherwise have considered, often with serendipitous results. And what with juggling a full-time job, working around the team’s schedules and needing to sleep once in a while, it is with a pang of regret that I must apologise to those companies who invited us to shows we were unfortunately unable to make. One of those, Guru Dudu, has extended its run until this weekend, and would very much welcome an audience – I’ve heard great things about it.

Now September’s here and Edinburgh slowly gets itself back to normal, I hand the reins back over to Alan, and I look forward to what delights will be shared in Edinburgh’s theatres for the next 49 weeks.

On entering the Big Sexy Circus City compound one is greeted by acrobats just casually performing to the queue of punters, while a tightrope walker works his way backwards along a wire overhead, occasionally stopping to balance on one leg. You know, how a normal night starts. When you enter the big top, it only gets more impressive.

While the opening few minutes take a little adjusting to (there’s fire, there’s water and there are people parading around dressed as various fairground attractions for no particular reason), it soon turns into a circus spectacle with amazing acts, unlike anything I’ve ever seen.

We’re warmed into the spectacle with a wonderful solo tap routine, accompanied in part by a drummer. The dancer starts in a small circle of light, and makes fun of chasing the light as it moves to continue his routine. A few minutes later he’s filling the whole stage with energy and playing a very enjoyable call-and-response rhythmic game with the drummer. Straight after this, there’s a breathtaking counter-balance rope routine, with two performers supporting each other’s weight while performing daring swings and tumbles. Their artistry on the ropes was incredible, while how they supported and propelled each other seemed to defy all laws of science.

Perhaps my favourite sequence followed directly after this, which involved a lot of balls suspended from the ceiling which swung like pendulums across the stage, with an intricate contemporary dance routine performed in between swings. How the performers managed to dodge them with such apparent ease was again a cause for wonder.

Also worth noting is the performance’s closing act, which I won’t spoil but is absolutely worth holding out for. Control and patience are brought new meaning with one performer and her selection of sticks…

Throughout this show the costumes, sound and lighting are all stunning. Each adds more depth to an already very sensory performance, and go to show how much love, care and artistry have gone into developing it. I’ll admit I didn’t really understand everything that was going on (there wasn’t a clear narrative or sense of development), but with a show as visually and technically spectacular as this, you really don’t need to. You can just sit and be in awe of spectacle, scraping your jaw up off the floor at the end.